Longtime East Village residents open Foxface, now serving sandwiches at Theater 80
[All photos by Stacie Joy]Late last year, East Village residents Ori Kushnir and Sivan Lahat opened Foxface, a small sandwich operation inside the William Barnacle Tavern at Theatre 80 on St. Mark’s Place.The space — featuring a narrow sliding window facing the sidewalk with a small counter inside the door — became available after Feltman’s moved out last fall after two-plus year peddling hot dogs from here.The situation seemed ideal for Kushnir and Lahat, who are married and live in the building here at No. 80 between First Avenue and Second Avenue. A few of the ingredients were even grown in the garden behind the building.After several weeks of limited hours, the two are now opening Foxface (as of yesterday) for business five days a week (see below for schedule).Here’s Ori on how Foxface came about:We first moved into the building exactly 15 years ago, and have watched [owner Lorcan Otway] revive the theater and the bar after the Pearl Theatre left. This past October we had just come back after spending five years in Japan where we had some fun with pop-up restaurants, and we’d been toying with the idea of opening something in New York when Lorcan told us that Feltman’s was leaving to focus on his retail business. We didn’t know exactly what it was that we’d do there but the appeal of the commute and operating a mom-and-pop shop in the neighborhood was such that we just told Lorcan we’ll take the space. We went ahead and renovated the kitchen, developed an initial menu of sandwiches and started serving food to the street and into the William Barnacle Tavern while working on seating arrangements, a nice wine list and other improvements. We try not to make too much of a point about our background, the ingredients we use, etc., as we feel the food should speak for itself, but I will say that we must be the only place on St. Mark’s Place using hot sauce made from chili peppers grown on the block, so their commute is as short as ours.On the reception so far:The first few weeks have been great, despite the cold weather. We opened quietly … but feedback has been very positive and it’s a joy watching people loving your food, coming back for more, and sending their friends over. The local business community has also been amazingly supportive — shout out to Abraço, and to the very friendly team at the Holiday.On the menu:We’re trying to serve five sandwiches every day, with one or two new ones introduced every week, and a soup or stew during winter. I think the Smoking Fox (smoked boneless rib, coleslaw, pickles, homemade spicy sauce) is going to be there permanently as people love it, but otherwise we’ll just keep changing with the seasons. View this post on Instagram Peter Peter – Egg, kabocha, gruyere, brie, pumpkin seeds.A post shared by Foxface (@foxface_nyc) on Dec 29, 2018 at 1:13pm PST//www.instagram.com/embed.js—Foxface is located inside Theatre 80, 80 St. Mark’s Place between First Avenue and Second Avenue.Hours — Wednesday, Thursday and Friday: 12:30-3p.m.; 6 p.m. until sold out. Saturday and Sunday: 1 p.m. until sold outYou can find their daily menu and other updates via the Foxface Instagram account at this link.Thanks to Stacie Joy for all the photos! 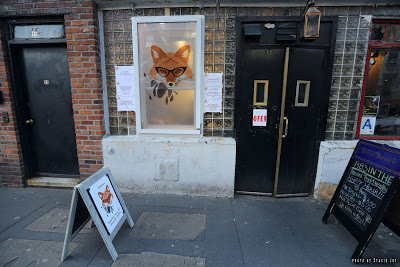 Published in Foxface and Theatre 80