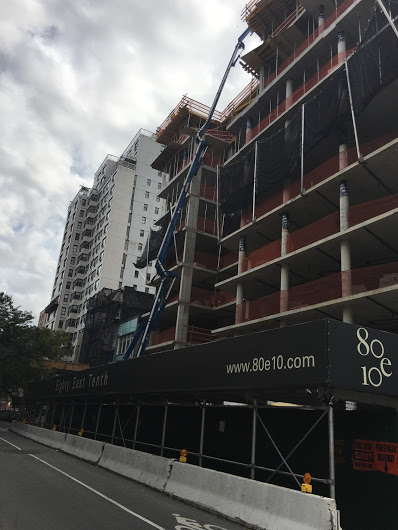 Selling Eighty East Tenth
[Photo from Monday]Sales kicked off the middle of last month for 80 E. 10th St., the 10-floor condoplex at Fourth Avenue.There are just 12 units here in the development called Eighty East Tenth, ranging from one to five bedrooms.Of the seven units currently on the market (ranging in price from $1.95 million to $7.85 million), four of them are in contract. (This info is via Streeteasy and the Eighty website.)Anyway, there are more photos and descriptions of the building since our last look.Per the 80 website:Façade“Eighty East Tenth Street sits at the heart of a historically significant stretch of Fourth Avenue formerly known as Book Row, once the center of the rare and antique book trade in America. Inspired by this unique history, NAVA began an intensive creative process of transforming and expressing the written word into a physical pattern on the building’s façade. The resulting metal surface features a circular grid pattern of discreet concave and convex impressions which make each panel a distinct manifestation of the neighborhood’s rich heritage.”As noted before, a one-level row of businesses were on this corner, including a market and St. Marx Music, until 2007.The storefronts sat empty for years, waiting for development. Here’s the corner in 2013…The walls of the empty building were also home to the 10th Street Free Press (aka The Scribbler), who has relocated to the wall outside Duane Reade on 10th and Third…[Photo from Monday]Renderings via NAVA