1 month in: Basquiat at the Brant Foundation

1 month in: Basquiat at the Brant Foundation
[Photo by James Maher]The Basquiat exhibit officially opened to the ticket-holding public back on March 6 at the Brant Foundation, 421 E. Sixth St. between Avenue A and First Avenue.The exhibit, featuring some 70 works collectively valued at $1 billion, is up through May 15. There is a waitlist (link here) for admittance.Multiple EVG contributors/readers have shared photos from inside the four-level space owned by Peter M. Brant this past month. Overall the comments about the exhibit, the inaugural one inside this renovated building, have been overwhelmingly positive. People have appreciated how uncrowded the floors feel … as well as the East Village views the space provides. The following shots are by old EVG friend James Maher…… and Carol from East Fifth Street shared these… (she called the exhibit “extraordinary — I was truly overwhelmed.”)Previously on EV Grieve:A Basquiat-at-the-Brant Foundation reader 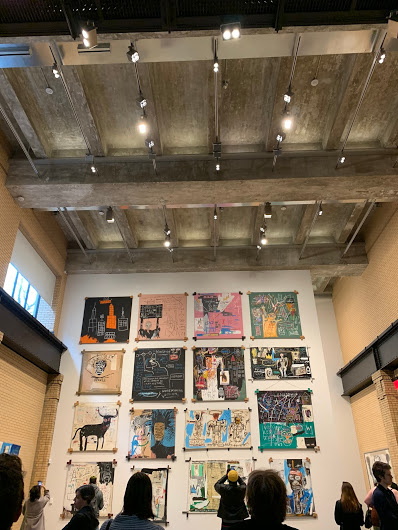