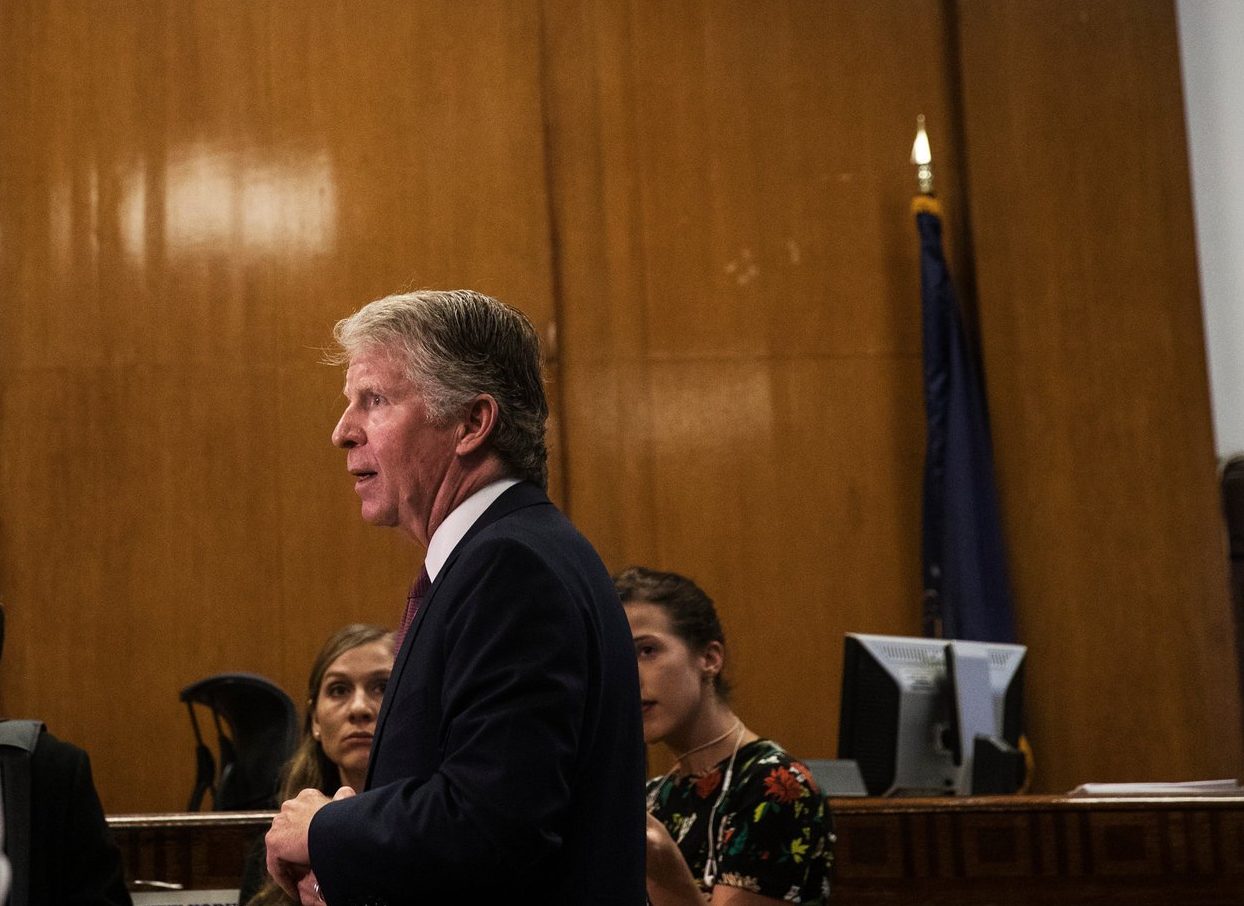 A Growing Call to Limit Lawyers’ Donations to Prosecutors

A Growing Call to Limit Lawyers’ Donations to Prosecutors
After criticism in cases involved the Trumps and Harvey Weinstein, the Manhattan district attorney says it’s time to limit contributions from defense lawyers.

Minutes after winning re-election to a third term last week, the Manhattan district attorney, Cyrus R. Vance Jr., a celebratory drink in hand, was asked how he would rebuild the trust of voters angry about large donations to his campaign from defense lawyers with cases before his office.

“It’s very important that we address this public concern,” he said. “And we will. We will institute sensible, progressive and effective fund-raising policies and limits.”

Much had changed in Mr. Vance’s world since his campaign sent out an invitation last May for his last big fund-raiser, a “Women for Cy” luncheon.

Mixed in among the boldface names of politicians, actors, socialites and real estate developers on the host committee were two criminal defense attorneys who often represent people in Manhattan.

Donations to district attorney candidates from defense lawyers are legal in New York and have been going on since the 19th century. Yet the practice has drawn new scrutiny in recent weeks, after critics raised conflict-of-interest questions about Mr. Vance’s decisions not to prosecute Harvey Weinstein and members of the Trump family in separate cases. The defense lawyers in both cases were big contributors to Mr. Vance’s campaign.

So fierce was the public reaction that two write-in candidates jumped into the race and took a combined 9 percent to the vote — some 18,000 protest votes that marred what was supposed to be an unopposed glide to re-election.

In the United States, local prosecutors wield immense power over the fate of defendants. Nine of 10 cases are resolved through plea bargains, and prosecutors negotiate the terms almost entirely out of the public eye. They decide whether to bring a case or drop charges, to charge a misdemeanor or a felony, to demand prison or accept probation.

Yet in all but three states prosecutors are also elected officials. About 2,300 prosecutors across the country must raise money for campaigns, opening them up to charges of favoritism toward contributors. What’s more, most prosecutors serve multiple terms, and they run unopposed for re-election more than 80 percent of the time, academic studies have shown. One reason is that few criminal defense lawyers are willing to risk alienating them with a political challenge.

In New York, donations from defense lawyers have been a questionable, albeit legal, feature of the campaign financing system for decades, lawyers said.

“It’s a definite problem — it looks bad,” said Michael G. Cherkasky, a former high-ranking Manhattan prosecutor who was Mr. Vance’s finance chairman in 2009. “We also live in a practical world. It’s the only way you are going to raise money and get elected unless you happen to be so wealthy you can self-fund.”

Three weeks before the election, Mr. Vance, a Democrat who has cultivated an image as criminal justice reformer, leaned into the wind, announcing it was time to re-examine the wisdom of letting defense lawyers give thousands of dollars to prosecutors. Such donations, he said, breed public cynicism about a prosecutor’s decisions, and he asked the Center for the Advancement of Public Integrity, an anti-corruption think tank at Columbia Law School, to come up with proposals to limit the impact of such contributions.

The good-government groups Common Cause and Citizens Union joined in, calling for district attorneys to reject contributions from the defense bar. At the same time, Assemblyman Daniel Quart, a Manhattan Democrat and a former defense lawyer who often criticizes Mr. Vance, said he has drafted legislation that would sharply limit such contributions.

“This is not unique to Vance at all,” said Susan Lerner, the executive director of Common Cause New York. “If you dig into campaign contributions for virtually any district attorney, you are going to find contributions from defense attorneys, law firms and bail bondsmen.”

Yet defense lawyers and former prosecutors say the issue is not cut-and-dried. Banning donations raises questions about the free speech rights of lawyers. In addition, they say, a ban on such donations might also sharply curb who can afford to run, limiting it to the rich.

What’s more, lawyers and prosecutors say, few people outside legal circles pay attention to district attorney races or know anything about a candidate’s abilities as a lawyer. Most candidates are either former prosecutors or defense lawyers who draw their initial support from fellow lawyers.

As county officials, district attorneys are not bound by city campaign finance laws. In Manhattan, an individual can donate close to $57,000 in an election cycle, a cap calculated based on the county’s population.

Mr. Vance established a vetting system to ensure his prosecutors were not aware of campaign donations and to weed out gifts from defendants and victims involved in pending cases, his aides said. But when it came to defense lawyers, a senior official in his office made a case-by-case decision about whether the donation created a conflict of interest and should be returned.

That happened in the case of Marc E. Kasowitz, a lawyer for the Trump family who met with Mr. Vance to argue his team should not charge Ivanka Trump and Donald Trump Jr. for allegedly misleading investors in a condo-hotel project. Before the meeting, Mr. Vance’s chief assistant at the time, Daniel R. Alonso, directed the campaign to return a $25,000 contribution from Mr. Kasowitz. A year later, however, Mr. Vance’s campaign accepted a $32,000 gift from Mr. Kasowitz, only to end up returning it seven weeks ago after reporters highlighted it.

About 40 percent of Mr. Vance’s $6.1 million in contributions came from lawyers. Many of the biggest givers are not criminal defense lawyers who practice in Manhattan, but financiers and business leaders like Ronald O. Perelman, chairman of MacAndrews & Forbes Inc. Others were prominent litigators and corporate lawyers, like David Boies, the Democratic Party stalwart who argued for marriage equality before the United States Supreme Court.

Mr. Boies represented Mr. Weinstein in civil matters and hired Black Cube, a private investigative company, to dig up information in an effort to stop the publication of a New York Times exposé on Mr. Weinstein’s harassment of women. He has given Mr. Vance $55,000 over the years.

Yet Mr. Boies said he has never spoken to Mr. Vance about a criminal investigation of Mr. Weinstein. And on Friday, Mr. Vance’s office subpoenaed Mr. Boies’s records regarding the movie producer and his company as part of a widening investigation into allegations of sexual misconduct.

Since 2009, Mr. Vance’s campaign coffers have received at least $300,000 from lawyers and law firms who regularly represent criminal clients in Manhattan, according to campaign disclosure reports.

Mr. Vance firmly denies contributions affected his decision-making on any case, but he acknowledges they may have tainted public confidence in his independence.

One possible reform would be to put a low cap on the contributions from lawyers who represent criminal defendants in Manhattan, just as city election laws cap donations from people who do business with the city. Assemblyman Quart’s bill would take that approach. A second idea is to establish public financing for prosecutor’s races. A more extreme solution would be to establish a system of appointed prosecutors, as is done in Connecticut, New Jersey and Alaska.

Stephen Gillers, a professor who studies legal ethics at New York University School of Law, said under the current system, the only check that keeps elected prosecutors from playing favorites is the ballot box.

“You are relying on the district attorney’s integrity and the risk of losing the next election,” he said.

Some lawyers said privately they gave money in the hope it would make it easier to get a meeting with a supervisor, or with Mr. Vance himself, if they could not negotiate a plea with the trial-level assistant district attorney. Such meetings can be critical in their line of work, since most cases never go to trial.

Yet Mr. Vance says donations do not buy access. He is willing to hear from any defense lawyer with a legitimate argument to make, regardless of the lawyer’s political leanings, he said. “I meet with scores of lawyers at various stages,” he said in a recent interview.

Several defense lawyers who have given generously to Mr. Vances’s campaign rejected the notion their money could sway a case’s outcome. Indeed, several of Mr. Vance’s friends and campaign contributors recalled times he had rejected their arguments for leniency on behalf of a client.

Elkan Abramowitz, who is Mr. Vance’s former law partner, said he has had cases go both ways, despite being a major financial supporter of Mr. Vance since his first campaign in 2009, personally donating $26,000 over the years. (His firm and partners have given another $62,000.)

In recent years, Mr. Abramowitz has represented two high-profile defendants in dealings with Mr. Vance’s office. In one case, he persuaded Mr. Vance’s team not to prosecute Harvey Weinstein in the alleged groping of an Italian model, after pointing out she had given shifting accounts about a previous sexual assault allegation.

In the other, Mr. Abramowitz failed to persuade Mr. Vance to drop a prosecution of Stephen H. Davis, the former chairman of the Dewey & LeBoeuf law firm, on fraud charges.

“He turned me down,” Mr. Abramowitz recalled.

The first trial of Mr. Davis and his co-defendants ended in a mistrial, after the jury deadlocked on dozens of charges. Mr. Vance’s office eventually agreed to a deferred prosecution agreement under which Mr. Davis agreed not to practice law for five years.

Another longtime supporter of Mr. Vance is Isabelle A. Kirshner, who started with him in the Manhattan district attorney’s office in the early 1980s.

Ms. Kirshner has given Mr. Vance, whom she considers a friend, a total of $6,000 and has also represented defendants charged by his office. In February 2016, for instance, she successfully negotiated a plea bargain for a gynecologist accused of molesting six patients. The deal included no prison time for the doctor, though he lost his license and pleaded guilty to a felony.

Officials in the district attorney’s office said Mr. Vance’s chief assistant, Karen Friedman-Agnifilo, met with Ms. Kirshner and insisted the doctor plead guilty to a felony as part of any deal, overruling a lower level assistant who had agreed to a lesser charge.

Ms. Kirshner said she makes it a point never to discuss her cases with Mr. Vance himself. “I have never seen any evidence of my contributions having assisted me in resolving matters,” she said. The resolution of the doctor’s case, she said, came after months of negotiations during which she pointed out problems with the evidence against her client.

“You don’t get what is perceived to be this golden deal because you go in and you ask nicely and say, ‘Oh, I’m a friend of Cy’s,’” she said. “It did not work like that.”