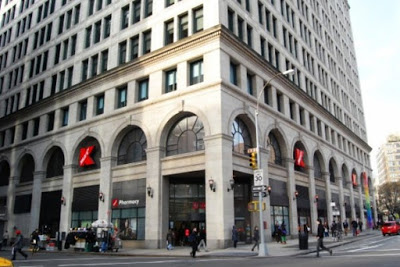 Are Kmart’s days numbered on Astor Place?
[Image via]The Real Deal reports that Facebook and Vornado Realty Trust are in talks to expand the social media giant’s presence at 770 Broadway, the landmarked building on Astor Place.Per The Real Deal:Vornado … recently paid roughly $46 million to Kmart – whose department store occupies about 30,000 square feet on the ground, mezzanine and lower-level of the building – in what appears to be a buyout of the retailer’s lease, according to city property records. Observers said it’s unlikely that Vornado boss Steve Roth would take such a risk without a replacement tenant lined up, and speculated that Facebook could be looking to make a splash with a high-profile storefront, a la Microsoft’s store on Fifth Avenue.A Vornado rep declined to comment.The building — the former Wanamaker’s department store — is also home to J Crew, Nielsen and Oath, the subsidiary of Verizon that serves as the umbrella company for AOL and Yahoo!This location was not listed among the 64 Kmart stores that the company will close this year, per an announcement yesterday.Kmart opened — to some WTF groans — on Astor Place in 1996.

Published in Astor Place and Kmart