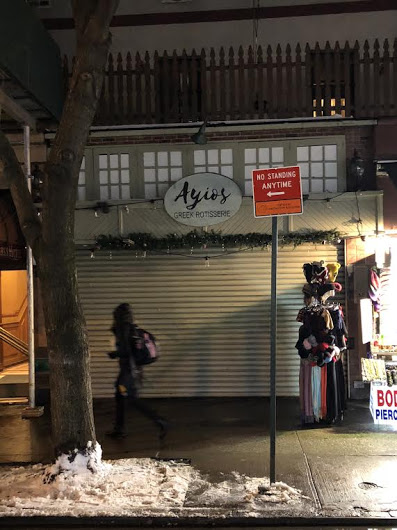 Ayios Greek Rotisserie has closed on St. Mark’s Place
[Photo yesterday by Steven]Word is spreading that the Greek restaurant at 2 St. Mark’s Place at Third Avenue/Cooper Square has called it a day. One of the workers in a nearby kiosk told Steven that Ayios closed at the end of 2017. The gate has been down during advertised business hours of late. There’s nothing mentioning a closure on their website. There’s no answer on the phone… while Yelp is reporting that they have closed…The restaurant opened on Aug. 31, 2016 at No. 2, whose previous tenant was the St. Mark’s Ale House. They closed in July 2016 after 21 years in business.H/T EVG reader Paul!

Published in Ayios Greek Rotisserie and restaurants that are now closed