Chelsea Thai closes after 5 months on 1st Avenue
[Photo Saturday by Steven]On Friday night, Chelsea Thai founder-chef Saruj Nimkarn hung the closing sign on his restaurant at 192 First Ave. between 11th Street and 12th Street.[Photo by Lola Sáenz]Nimkarn just debuted here in August after 21 years in the Chelsea Market. (A rent increase there forced Nimkarn to look elsewhere.) Unfortunately, he told EVG regular Lola Sáenz that there wasn’t enough business in his new space to make the rent. The food was delicious and reasonably priced. Not entirely sure why the restaurant didn’t last. (Lack of a liquor license? Not enough daytime foot traffic? Too many other buzzy new restaurants nearby such as Little Tong Noodle Shop and Tatsu Ramen?)The address was previously home to the Neptune. The Polish-American diner closed in December 2016 after 15 years in business. According to one source, the rent doubled. After Neptune’s departure, the landlord divided up the restaurant into two retail spaces. Space 194, a hybrid tea-coffee shop-gallery recently opened in the other storefront.Previously on EV Grieve:Chelsea Thai coming to former Neptune space on 1st Avenue; Filipino fare for Avenue AChelsea Thai debuts on 1st Avenue 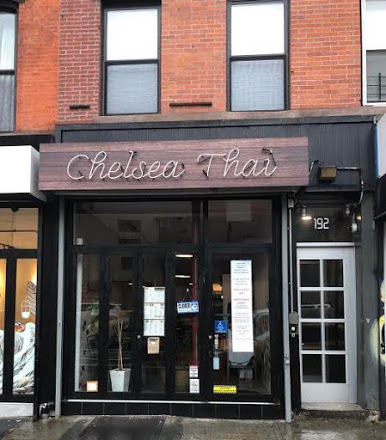