City Council to hold public hearing Monday on hotel next to the Merchant’s House
[Illustration by SJ Costello]The 186-year-old Merchant’s House Museum continues the fight against the developers of the proposed hotel next door to the city, state and federal landmark on Fourth Street between the Bowery and Lafayette.Next up: The City Council Zoning Subcommittee meeting on Monday morning.The eight-story hotel, which has been in the works for several years, would rise 100 feet on a lot to the west — currently housing Al-Amin Food Inc., which stores food carts. The developers, Kalodop II Park, are seeking a spot rezoning to build the structure that high. The seven-month public review process, the Uniform Land Use Review Procedure (ULURP), began in the spring. This development is of grave concern to preservationists, not to mention the leadership of Merchant’s House, the circa-1832 building that is one of only six residences in NYC that is both an exterior and an interior landmark. (The Merchant’s House has a call to arms, which you can read here.)However, landmark status does not guarantee protection from adjacent construction, and Merchant’s House officials are worried that the ensuing excavation and subsequent work will damage their building.[Via SRA Architecture and Engineering]On Aug. 25, the City Planning Commission voted to approve the application, rejecting the denial recommendations of both Community Board 2 and Manhattan Borough President Gale Brewer.The application is now with City Council. A public hearing is set for Monday morning at 9:30 at 250 Broadway, 16th Floor.As Curbed reported on June 1:The Council member representing this part of the East Village, Carolina Rivera, seems to be on the side of the museum and preservationists, saying in a statement in May that she would not support the project until the museum was assured of the safety of its building. The City Council is the final stop for this project, and other City Council members usually tend to side with the Council member representing that particular neighborhood…Rivera disappointed preservationists and some other residents last month with her yes vote for the 14th Street tech hub without any substantial zoning limitations on neighboring blocks.Previously on EV Grieve:Concern again for Merchant’s House Museum as developer moves forward with hotel next doorReport: Landmarks Preservation Commission OKs plans for hotel next door to the Merchant’s HousePlans filed for new 8-story hotel next to the historic Merchant’s House Museum on East 4th Street 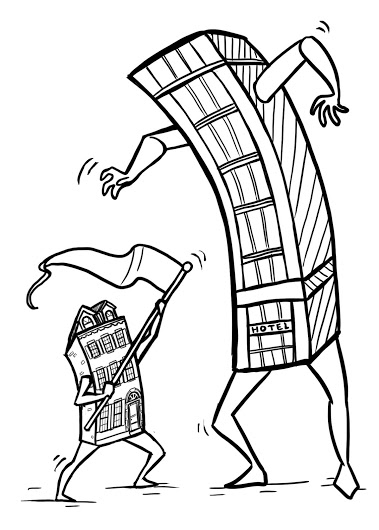