Commodities is under new ownership on 1st Avenue

Commodities is under new ownership on 1st Avenue
Tipsters galore have shared the news that Commodities Natural Market at 165 First Ave. has a new owner, as the sign posted on the front door notes…EVG correspondent Steven met the new owner, Ashok Patel …Patel said that the store’s current healthy focus will remain, though its name will change to Commodities Health Foods in the near future. Michael Hughes opened Commodities here between 10th Street and 11th Street in 1993. Hughes and his wife Audra opened an outpost in Vermont in 2015 (there are now two there). Leading up to that Vermont debut, Michael’s brother Ed took over the East Village shop.In any event, the arrival of new ownership will likely put to rest those persistent rumors that circulated last fall about the store closing, based in part on the under-stocked shelves… apparently patrons asked this question of the staff enough to lead to these signs at checkout …[Photo from last fall via Steven]Meanwhile, no word on what the new owner has in mind for those wily sparrows that flew in a few months ago when the front doors were open for a delivery…Employees have tried to shoo them out, but it hasn’t worked. H/T Linn, Bill, Daniel and dwg! 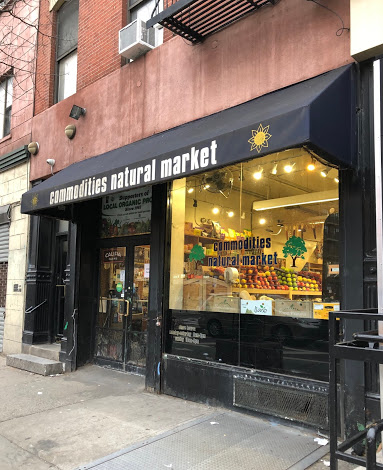