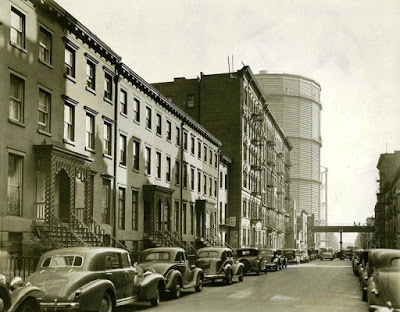 Con Ed hosting public meeting to discuss cleanup plans for former Gas House District
[East 20th Street looking east toward 1st Avenue in 1938 via]As you might know, the current home of Stuy Town/Peter Cooper Village was once the Gas House District in the late 19th century and early 20th century. The area was named for the Manufactured Gas Plant (MGP) stations and facilities that converted coal and oil into gas. Con Ed and its predecessors ran the stations. (Read more background here and here.)Here’s a map circa 1897 showing the area when Avenue A (yellow arrow) and Avenue B (blue arrow) crossed north of 14th Street. (Threw in a black arrow for Avenue C too.)[Click for more detail]As Ephemeral New York has posted, by the 1930s, most of the storage tanks were gone.Soon, it was deemed the perfect place to put Met Life’s new middle-class housing developments, Stuyvesant Town and Peter Cooper Village.In 1945, 3,000 families were moved out of the Gas House District …Per reports in Town & Village (here), Con Ed has been testing and looking for contaminants in the ground, groundwater and air in recent years. (The State Department of Environmental Conservation and the State Department of Health are reportedly coordinating the testing.)From Town & Village on Oct. 19:According to the study’s findings from investigations in 2006 and 2008, contaminants were found, but located deep in the ground (at least five feet) with most even lower, and in groundwater beneath the site, though that water is not used for drinking. MGP residential levels tested in the air indoors were found to be typical. Outdoor air samples collected were also found to be normal for an urban area. Because of this, Con Ed said in an advisory this week that it’s unlikely people will come into contact with these contaminants, though air monitoring will continue.Still, the company is now proposing a “remediation” (cleanup) plan for the site that involves, among other things, the placement of wells.The Stuyvesant Town/Peter Cooper Village Tenants Association and Con Edison are holding a public meeting tomorrow night at 7 to discuss the cleanup plans. The meeting is at Mount Sinai Beth Israel’s Podell Auditorium in the Bernstein Building, 10 Perlman Place, one block west of First Avenue between 15th Street and 16th Street. In addition, the State Department of Environmental Conservation is accepting public comments in writing Nov. 10. You may submit those to Douglas MacNeal, project manager at the DEC, at douglas.macneal@dec.ny.gov or 625 Broadway, Albany, NY, 12233.Con Ed has more posted more documents and background here.