Final demolition phase for 1 St. Mark’s Place; more questions about lobbyists attached to project
Workers shrouded the exterior here on the northeast corner of Third Avenue and St. Mark’s Place last week as demolition enters the final phase.As previously reported, 3 St. Mark’s Place, 23 and 25-27 Third Avenue are coming down to make way for an office building with ground-floor retail.The size of this new building has yet to be determined. As previously reported, Real Estate Equities Corporation (REEC) wants to transfer the air rights from the landmarked Hamilton-Holly House at 4 St. Mark’s Place to add more floors and square footage to their office building, a move that has its critics, including Community Board 3 and State Sen. Brad Hoylman and Assemblywoman Deborah Glick, who reportedly called on the Landmarks Preservation Commission to deny the bulk waiver.REEC has already filed permits (last October) for an as-of-right five-story, 29,030-square-foot building on the corner. If the air rights deal is ultimately OK’d, then the Morris Adjimi-designed building at 3 St. Mark’s Place could bulk up to 10 stories. Yesterday, the Daily News looked at the lobbyists tied to the project — those who happen to have connections with Mayor de Blasio. (We explored this angle back in February.) Andrew Berman, executive director of Village Preservation, told this to the News:”The mayor’s prodigious fundraiser, lobbyist Jim Capalino, is seeking favors from City Hall for his clients to lift restrictions and facilitate inappropriate development in the East Village. The number of projects this lobbying firm has gotten approvals for in this neighborhood is mind-boggling.”Each new favor builds upon the next,” he continued. “First he got permission for an upzoning south of Union Square for an oversized ‘tech hub.’ Now he’s seeking air rights transfers to continue the spread of ‘Silicon Alley’ to St. Mark’s Place. The mayor’s pay-to-play practices are utterly transforming this neighborhood.”Capalino’s spokesperson, Kenneth Fisher, had this response:”Projects like these require multiple levels of public review and hearings and consideration of the merits by numerous public officials and professionals. Perhaps [Berman] would be more successful arguing on these merits rather than spreading absurd rumors.”As far as next steps, here’s Curbed after the previous LPC meeting in April:REEC will return to LPC at a not-yet-scheduled public meeting once they have altered their proposal to incorporate the commission’s recommendation that they lower the structure’s first setback to better align with St. Mark’s street wall and other feedback.Previously on EV Grieve:Demolition permits filed for northeast corner of 3rd Avenue and St. Mark’s PlaceEnd is nearing for the businesses on the northeast corner of 3rd Avenue and St. Mark’s PlaceNew building plans revealed for 3rd Avenue and St. Mark’s PlaceConcern over potential air-rights transfer for new office building on St. Mark’s Place and 3rd AvenueDevelopers of 3 St. Mark’s Place are looking to increase the size of their proposed office building at 3rd Avenue to 10 floors with air-rights dealThe lobbyists behind the air-rights transfer and zoning variance for 3 St. Mark’s Place 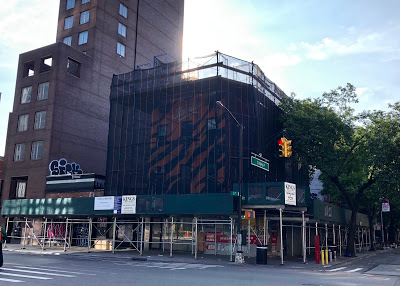