H Mart will open very, very soon on 3rd Avenue
[Photo Saturday by Steven]The H Mart is looking very close to opening here in the retail space of NYU’s Alumni Hall on Third Avenue between Ninth Street and 10th Street.How close?An H Mart manager told EVG correspondent Steven that they could open as soon as today, though more likely a little later this week. We first spotted the branding for the Asian-American supermarket here last August. This will be the third H Mart in Manhattan (the others are on West 32nd Street and Broadway on the Upper West Side). Overall, H Mart, based in Lyndhurst, N.J., has more than 70 outposts in the United States and Canada.Workers combined four retail spaces on this block to fit this H Mart — the former Birdbath and Citi Habitats office (both of those businesses left in the summer of 2014 … as well as a Subway (sandwich shop) and Saint’s Alp Teahouse. 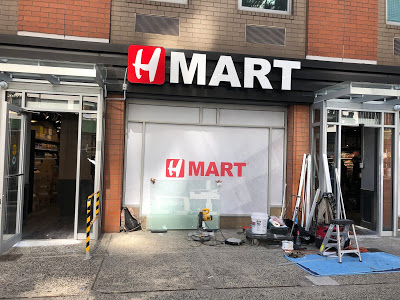