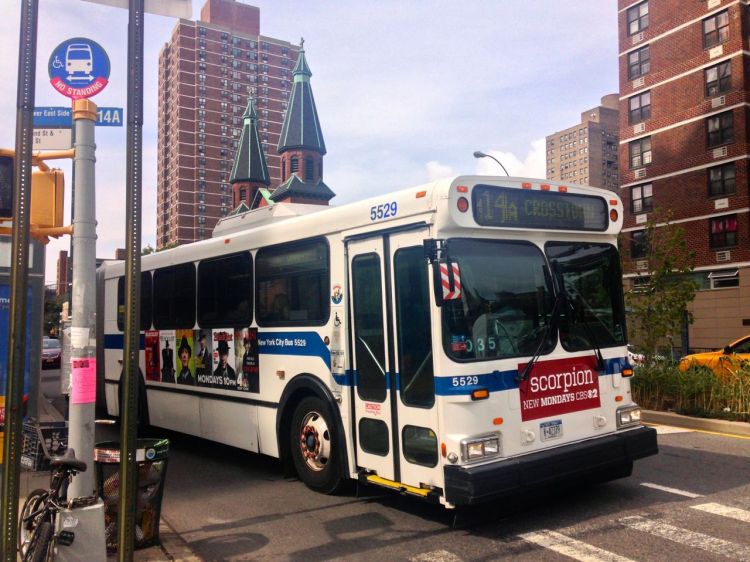 Local activists and community activists are celebrating the MTA’s decision to retain at least some local service on the M14 A and D lines through the Lower East Side. The transit authority had proposed the elimination of numerous stops, including along Grand Street, to accommodate express bus service. This week, officials backed away from an earlier version of the plan in the face of intense community opposition.

The MTA expects to launch 14th Street Select Bus Service next month in an effort to alleviate impacts of the L Train slowdown. As the Daily News reported, “The MTA said the proposed route will include 68 stops, leaving a total reduction of 16 from the 84 stops on the current M14 A and D routes… Earlier iterations of the MTA’s plan included fewer stops, but elected officials and community groups pushed for more to be maintained in order to better service elderly and disabled commuters.”

An MTA spokesperson said, “We arrived at this final compromise plan through close consultation with residents, community groups, advocates and elected officials. Once the new route is implemented we will actively monitor it to ensure it is providing the best possible service for our customers, seeking to balance convenience and increased speed, which is desperately needed along this line.”

We rallied, petitioned and organized and we won! The M14 Grand Street stops were restored. I want to thank everyone-especially the seniors-who marched, went to meetings and raised their voices to show @MTA the importance of an accessible bus system for all NYers. #SaveM14Service pic.twitter.com/3Oy0pMxnaH

The new M14 SBS plan will ensure faster service while providing better access for many of our NORCs, but @MTA and @NYC_DOT must do more to provide safe transit options for our seniors and NYCHA residents. Read my full statement below. pic.twitter.com/R7LdpkIXCw — Carlina Rivera 利華娜 (@CarlinaRivera) May 15, 2019

After weeks of pressure from the SALT team & other local community groups, the MTA presented a revised plan for the M14 bus that preserves local service along the route. Thanks to all who participated & helped our #LES voices be heard & secured a huge victory for our community! pic.twitter.com/NdCfqy7sFJ

Published in Lower East Side News and m14