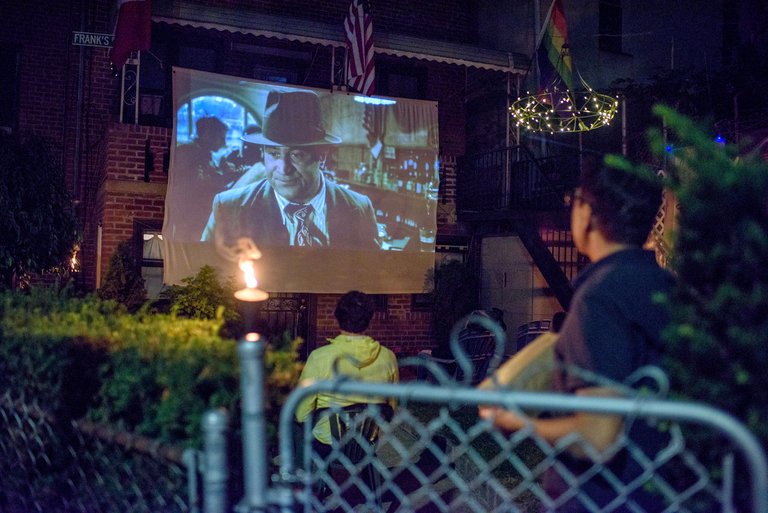 Neighborhood Joint: A Backyard Film Festival in Astoria, Queens
For 11 years, a passionate film buff has been inviting neighbors to watch movie classics on a piece of large fabric that hangs behind his house.

A number of neighbors in Astoria, Queens, share the same story: they were walking down 46th Street when Frank Zagottis invited them into his backyard for a movie.

“That was something I hadn’t seen before in New York,” said Nicola Jane Chase, an author who was new to the area when she first encountered Mr. Zagottis. She ended up offering to bring wine to his screening of Woody Allen’s “Bullets Over Broadway.”

For the past 11 years, Mr. Zagottis has drawn countless passers-by to a small triangle on the corner of 46th Street and Newtown Road. It is where movies are shown, he said, “the way they were supposed to be seen”: on a big screen, with the right aspect ratio, no pause button and, most important, with other people.

On a recent Saturday, Mr. Zagottis, 54, took the stage — well, really, the back staircase — like a director introducing his magnum opus. “Welcome,” he said, waving his arms, “to the Newtown Road Backyard Film Festival!”

Each season, which generally runs from June to October, has a theme, like “Ordinary People in Extraordinary Circumstances” (“Ordinary People,” “Strangers on a Train”) or “Found Humorous by the 10 Percent” (“The Birdcage,” “Victor/Victoria”). Mr. Zagottis had a particularly stressful time this year and so deemed 2017 “The Year of No-Brainers.” The current season is scheduled to conclude — unless Mr. Zagottis decides to add more screenings — with “The Rocky Horror Picture Show” on Oct. 15.

The festival began with friends, a tenant’s movie projector atop a ladder, and a king-size bedsheet, hung from the back porch. Then Mr. Zagottis’s father, a tailor from Italy, stitched together a special piece of fabric, and Frank invited the block. Fittingly, the first movie shown was “Cinema Paradiso,” an Italian film about a theater that brings a war-torn village together.

Word spread, and the homegrown series became something of a neighborhood tradition, at least to those who knew about it. Attendees created a “popcorn fund” and crowdsourced for a new projector when the old one broke. Out of necessity, lawn chairs were added. “There have been nights when he couldn’t fit anyone else in here,” said Colleen Jasinski, an events manager who lives nearby. In 2014, people watched “The Godfather” from the sidewalk.

After Mr. Zagottis’s close friend, Isabel Ruggero, died in 2014, he christened his backyard “Cinema Isabel,” lighting a candle for her at the start of each season. He avidly updates the tight-knit Facebook group with schedules and group photos of his audiences. A Brooklyn-born actor who once worked for HBO cutting DVDs and doing behind-the-scene interviews with directors, producers and actors, Mr. Zagottis also edits reels for the screenings that feature old-time advertisements, original trailers and previews.