No Dollface for the former Bar Virage space on 2nd Avenue

No Dollface for the former Bar Virage space on 2nd Avenue
Dollface, Ravi DeRossi’s vegan-diner concept, will have to find a home elsewhere.A for-rent sign now hangs at the former Bar Virage on Second Avenue at Seventh Street. Back in February, DeRossi appeared before Community Board 3 for a full liquor license for the space. However, CB3 issued a denial, citing among other reasons, its proximity to Middle Collegiate Church on Second Avenue between Sixth Street and Seventh Street.But didn’t Bar Virage have a full liquor license? Yes. Per the CB3 minutes from February:Community Board 3 does not know whether a determination was made by the SLA about this house of worship when the previous applicant was considered for a full on-premises liquor license but believes that a full on-premises liquor should not now be approved within the proximity of this location to a longstanding house of worship in this community…The minutes note, too, that “this applicant has also failed to submit any indication of its outreach to the community or support by the community for this application through petition signatures or other means.”In an email on Saturday, DeRossi confirmed that he will be looking for another spot for Dollface in the East Village.Bar Virage closed in late December after 20-plus years in business. No reason was cited for the closure.Previously on EV Grieve:Ravi DeRossi plans vegan diner in former Bar Virage space 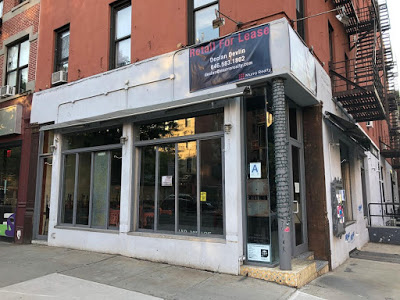