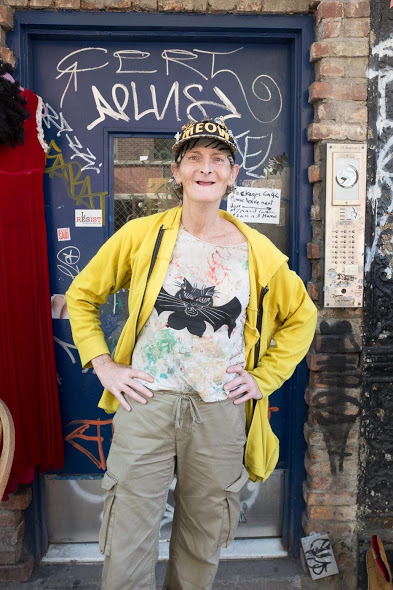 Out and About in the East Village

Out and About in the East Village
In this ongoing feature, East Village-based photographer James Maher provides us with a quick snapshot of someone who lives and/or works in the East Village or Lower East Side.By James MaherName: Siobhan MeowOccupation: Anything I could get Location: Avenue C and Second StreetDate: Friday, Oct 20I’m from Brooklyn. Coming here was a matter of my becoming homeless. I was living in Avenue U in Brooklyn, and I used take the train into the city all the time. I decided to live in the city, and when I got here I got an SRO, but I couldn’t afford the rent. I went through a period of unemployment, I ended up homeless, and I came down here in 1988 because I met some people at ABC No Rio. They let me sleep in the basement, and that’s how I met Geerta Franken because we were both modeling for drawing classes. We went to Seventh Street and met Michael Shanker, who is a wild pirate electrician who hooked us up, and I picked a building because it was around the corner from my best friend’s house.We opened a squat called Umbrella House. It was an absolute ruin. There were holes in the roof, holes in the floors, all the way down to the first floor, except for the main hallway. The two storefronts were filled to within two feet of the ceiling with old appliances and rubble and stuff, and this is a 12-foot ceiling. We had to dig it out.We called it Umbrella House because when it rained or snowed, and it was a six-story building, it would go all the way down to the first floor. It was not so dangerous, more like kind of fun. The three flights of stairs in the middle of the building were out so we had to use the fire escapes to go to the top floors.And of course there was no heat. Winter we spent in a very small room in sleeping bags to stay warm until we hooked up a hot electrical wire that Con Ed didn’t turn off, and then we had minimal electric where we could run heat for free and also power tools. We actually went 17 years without heat, which fortunately for me I was into cat rescues, so I had cat heat. They kept me warm, and also a big Carharrt suit, which is like a sleeping bag you walk around in.We had to put in our own sewer line. We weren’t legally allowed to do it even though we got a permit for it. We got the permit and we had a licensed plumber overseeing the job, but as soon as we started digging down into the sidewalk, somebody who didn’t like us called up the city and they shut it down. Fortunately we had started this on a Friday and so we covered the hole with boards and made like we weren’t working on it, but we went into the basement and broke through the wall and literally tunneled under to the sewer main. We had to put boards up because every time a truck or bus went over it, it would cause rocks to fall. That was dangerous and we’re lucky no one got killed, because we did it 24 hours straight for like four days with a chain of people with buckets. Once we got that it was easy to hook up the waterIn the first year they tried to evict us and the whole block was closed off with cops. We had a three-day siege, where we stood in the windows to prevent them from knocking our building down. The guy who was working the wrecking ball, he saw us in the window and he got out of the wrecker. He didn’t want to be responsible. But the more we got things legal, the harder it became for them to evict us. We did most of the repair work by scrounging and pilfering construction sites because there was a lot of construction going on at the time. This was mostly for cement, old joists, and steel beams that they would throw out. And over a period of 20 years we brought it up to where it’s now a legal low-income co-op that we own shares in. Find Part 2 with Siobhan Meow next week…James Maher is a fine art and studio photographer based in the East Village. Find his website here.

Published in Out and About in the East Village