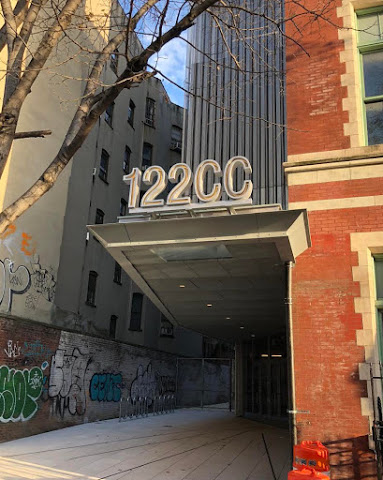 PS122 is now Performance Space New York, returns to 1st Avenue starting tonight
[Photo from Dec. 1 by Steven]Performance Space 122 (PS 122) has changed its name to Performance Space New York as it returns to its its newly renovated home on First Avenue and Ninth Street for the inaugural performances in the refurbished space.The announcement came yesterday in a series of posts on Instagram…Heart of East Village, 150 First Avenue, Fourth Floor, New York, NY 10009A post shared by Performance Space New York (@performancespacenewyork) on Jan 9, 2018 at 12:46pm PST//platform.instagram.com/en_US/embeds.jsUnveiling Performance Space New York. Jenny Schlenzka, artistic and executive director of @PerformanceSpaceNewYork Read more in today’s @nytimesA post shared by Performance Space New York (@performancespacenewyork) on Jan 9, 2018 at 1:02pm PST//platform.instagram.com/en_US/embeds.jsIt’s a big day. The first performances in our newly renovated home at 150 First Avenue and the first day that we will be known as Performance Space New York. This moment represents the beginning of the next chapter and we believe that #PerformanceSpaceNewYork communicates our ambition to be New York’s performance space—one representing, and inclusive of, all of New York—while also honoring our singular history. While we very much look forward to talking to you on this channel, we do hope you’ll join us for #Coil18 + The East Village Series because doing it live is simply the best.A post shared by Performance Space New York (@performancespacenewyork) on Jan 9, 2018 at 12:27pm PST//platform.instagram.com/en_US/embeds.jsThe New York Times has a preview of the new space in this article.The rebranding process, as the new name indicates, involves an effort to make Performance Space more welcoming to a wider audience. In its grungier former life, which began in 1980 when a group of artists took over an abandoned schoolhouse on First Avenue, the space fostered a certain sense of community, but it didn’t quite scream “come in.”And some thoughts from new executive artistic director Jenny Schlenzka…”If our audience could be a representation of the city, that would be a huge success,” she said, noting that downtown dance and theater audiences tend to be predominantly white. But the idea of separate audience-building initiatives doesn’t interest her. “I’ve been in these meetings about ‘Oh, we need to diversify our audience,’ and it’s always, ‘Let’s do a side program’ or ‘Let’s do a community day.’ But I don’t want a community day. I want the community to be the main program.”Performance Space New York hosts its first show here tonight with the start of the annual (and last) Coil festival. Find that program here.The East Village Series runs from Feb. 17 to June 30, and “will examine the history of Performance Space and its neighborhood, reflecting on forces that have shaped them: gentrification, the AIDS epidemic, and punk and club culture.”Ms. Schlenzka likened it to “the way that in psychoanalysis, you have to know your past to free yourself to conquer the future.”Nostalgia, she added, is off limits: “We have this amazing past that in my opinion not enough people know about. But it can drag us down, and that’s a fine line to navigate.” Find more about the East Village Series here.Aside from Performance Space New York, the 122 Community Center will house the Alliance for Positive Change, Mabou Mines, Painting Space 122, and a fifth tenant to be announced. Previously on EV Grieve:Here’s the sidewalk bridge-free corner of 9th Street and 1st Avenue — and the 122 Community CenterCome along on a tour of the under-renovation 122 Community Center on 1st Avenue