Report: Ex admits to murdering Elizabeth Lee on Cooper Square
[Photo from March 2018]Vincent Verdi, a former federal intelligence officer, pleaded guilty to murder in the 2nd degree yesterday for gunning down Elizabeth Lee on Cooper Square as she arrived for work on Nov. 1, 2017.As the Daily News reported last evening, Verdi told a judge he was remorseful for killing Lee.”These words come of a heavy heart,” Verdi said in Manhattan Supreme Court. “My sorrow for what I did has no limit, and is also true of my regret for the pain and anguish I have caused to many, many people.”The terms of this deal will see Verdi, 63, serve at least 18 years for the murder.Lee, who was 56 and a mother of two grown children, lived on the Upper East Side. She had just docked a Citi Bike when Verdi approached her and shot her twice. He then shot himself in the head.According to previous reports in the Daily News, Verdi spent four months stalking and harassing Lee. Police had arrested him previously for stalking. She had an order of protection barring him from contacting her, which was in place the morning he killed her.The DA’s office originally charged him with murder, weapons possession, aggravated criminal contempt and stalking. Lee was a longtime administrator at the nearby Grace Church School. She was remembered as a devoted mother and a friend to many.Previously on EV Grieve:Memorial for Elizabeth Lee on Cooper Square 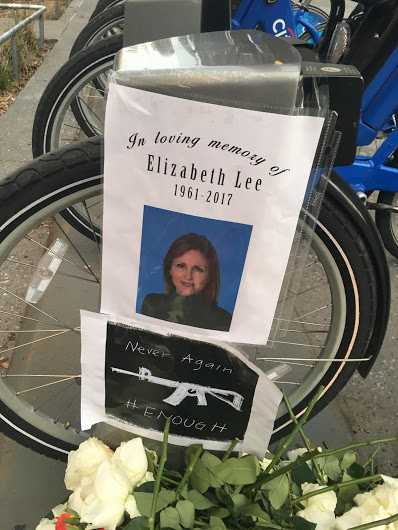