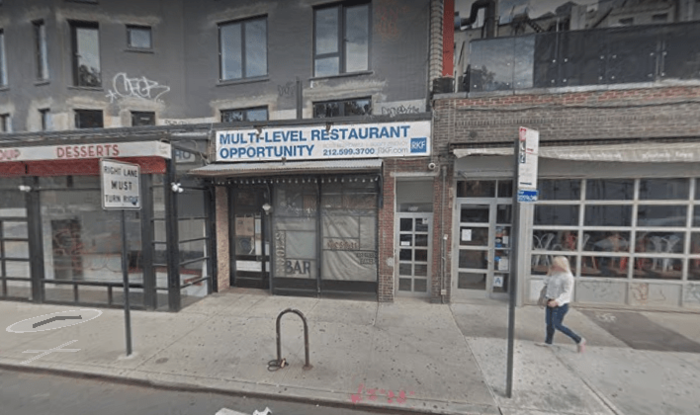 The State Liquor Authority rejected an application today for a big new venue that had been in-the-works at 200 Allen St. In an unusual move, two elected officials — State Sen. Brian Kavanagh and City Council member Margaret Chin — both appeared in person to testify against the applicant.

The project, Dos Cientos, was the latest venture by real estate developer/nightlife operator Michael Shah (he’s behind Sons of Essex and Rochelle’s). It was meant to be a bi-level Mexican restaurant/bar for 200 patrons. The space, located near East Houston St., has been vacant since the demise of Preserve 24 in 2014.

Community Board 3 opposed the application in a May 2017 resolution. Kavanagh, Chin, U.S. Rep. Nydia Velazquez, Manhattan Borough President Gale Brewer and State Assembly member Yuh-Line Niou backed it up with a letter to the liquor authority. Here’s part of the letter:

As detailed in the Community Board resolution, the applicants have a long history as bad actors in the communities where they operate. Community Board 3 has voiced their concern about Victor Jung. who the Board believes will have a lead role in the operations of this venue and who, in 2008, was convicted of a felony associated with his business operations, as outline in the May 2017 resolution. In addition, the resolution recalls that in 2014 the SLA found the applicants in violation for “improper conduct” and use of an “unauthorized trade name” in relation to another LLC known as 133 Essex Restaurant. In 2015, Manhattan Community Board 2 strongly called for the renewal of the applicants’ full on-premises liquor license to be denied for operating outside the Board’s stipulations.

Kavanagh and Chin, along with a representative from Niou’s office, communicated their concerns in person at a hearing in Manhattan today. It apparently helped sway the SLA, which voted against the application.

Big win for the LES—the Liquor Authority denied a license for Dos Cientos at 200 Allen St. There are already 43 bars within 500ft!

Thank you to @NY_SLA for listening to our community’s concerns and denying this application! — Margaret S. Chin (@CM_MargaretChin) January 10, 2018