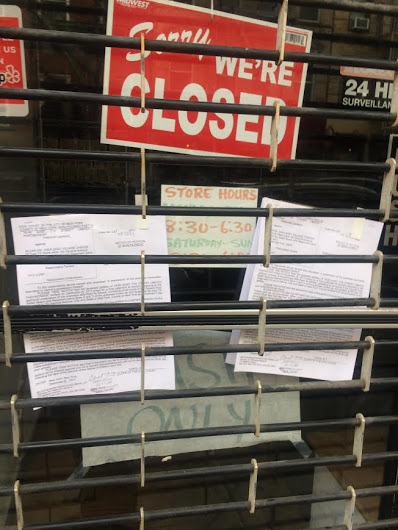 The nonpayment of rent notice has arrived at East Village Cheese

The nonpayment of rent notice has arrived at East Village Cheese
[Photo by Dave on 7th]As we’ve been noting, East Village Cheese at 80 E. Seventh St. between First Avenue and Second Avenue has been closed since the first week of December. (Recaps here and here.)Yesterday, legal documents from the Civil Court of the City of New York arrived on the front door with a “Notice of Petition of Non-Payment” (aka the rent is past due).A quick look at the paperwork on the door shows that the East Village Cheese owners owe $32,697 …The balance goes back to July … with the full amount of $6,489.60 due each month for rent since August, per the paperwork, which is dated Dec. 19.On Dec. 21, co-owner Lobsang Tsultrim was spotted at the storefront along with a Remove All My Junk truck. Before some of the perishable items had been discarded, the aroma of ripe cheese had been noticeable in the adjacent storefront. (The power at East Village Cheese has also been off since early December.)East Village Cheese moved here from Third Avenue in September 2015. By April 2016, regulars started worrying about the shop’s longterm financial health. For good reason, as it turned out.Previously on EV Grieve:Neighbor: East Village Cheese, closed now for 2 weeks, is starting to smell