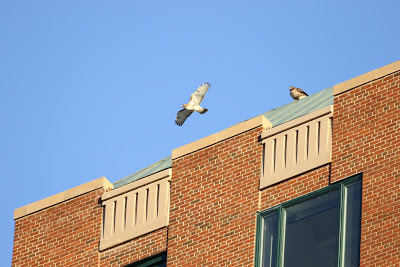 Triang hawk relations: Updates on Christo, Dora and Not-Dora/Nora
Steven took this photo of Christo and Not-Dora/Nora (on the right) yesterday atop the Christodora House on Avenue B.As previously reported, Christo, the red-tailed hawk of Tompkins Square Park, has been spotted several times in the companionship of this hawk while his longtime partner Dora continues to recuperate from an injured wing suffered in late November. Goggla had an update on Dora back on Thursday:[A]s of this week, her wounds have healed, but she is still unable to fly. She is still in the care of WINORR and we are hoping she can exercise her wing and regain strength. I really miss her and I think maybe Christo does, too. I try not to anthropomorphize and project my feelings onto him, but he has been acting sullen and surly since she’s been away.Goggla has more on Christo, Not-Dora/Nora and a juvenile red-tailed hawk in this post.Meanwhile, Christo has been working on a nest (pro tip: complete the bathroom first) … one can hopefully speculate that this is in anticipation of Dora’s return…[Nest photos by Steven]And from yesterday, Christo eating something…[Photo by Bobby Williams]P.S.I have not personally seen the opossum in the Park lately … but there have been several sightings this past week. Perhaps we’ll have some photographic evidence soon. Because people have asked about the opossum.Previously on EV Grieve:Scandal in Tompkins Square Park as Christo courts new hawk while Dora recuperatesThe ‘other’ hawkGet well soon, Dora!

Published in Christo and Dora and red-tailed hawks